It was about a year ago now that I had suggested to John Azzolina, the son of the late Joseph Azzolina Sr., founder of the Foodtown supermarket chain and who represented the northern Monmouth County Bayshore area, first as a State Senator than as a member of the NJ State Assembly, that he and his family should take the opportunity and market the image of Calico the Clown.

Calico, aka "the Evil" Clown of Middletown, has been the mascot for Foodtown's parent corporation Food Circus, since 1956 and has become something of a pop culture icon over the past dozen years, being featured in magazines (Weird NJ) and movies (Clerks 2).

John had told me at the time, that his brother Joe Jr.,had been thinking about marketing the image of Calico for sometime but just hadn't gotten around to it. So, after the encouraging words from me, he said that he would talk to his brother and see where he stood with it. 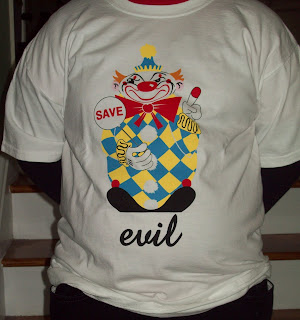 From time to time over the passing months, I've been receiving periodic update from John about the marketing of the clown. John said that it was a large undertaking and that it could take a while before all the legal issues of trademarks, licenses and copyrights could be worked out but they were being worked on and sometime soon there would be a whole line of merchandise featuring Calico "the Evil" Clown.
So when I walked into the Spirits Liquor store on Rt 35 in Middletown (the official home of Calico the Clown), just before this past Christmas to buy some libations for the holiday, I smiled to myself when I saw the very first "Evil" Clown t-shirt hanging off one of the wine displays as you enter the store, because I knew that I had played a small part in it being there.

I didn't purchase one of the shirts at the time because I was to busy trying to get Christmas under wraps, but I kept it in the back of my mind for the next time I made it to the store.

So A few days ago as it turns out, I received an email from John Azzolina with an updated status report on the merchandising efforts, he said that all the hurdles had been overcome and that the marketing of the "evil" clown had begun with the t-shirts with other merchandise and collectibles to come. He was glad to hear that I had already seen the t-shirt and was happy that I could smile about it.

So yesterday when I finally made it back to the liquor store, I had a hard time deciding which "Evil" Clown shirt to buy, now instead of just one shirt design, there were three or four designs and colors to chose from. It was a tough choice but I purchased the original shirt that I saw back in December,a white t-shirt with a large image of the clown on it. 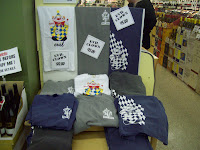 I was told that so far the sale results for the shirts have been great. The t-shirts are currently only available for sale at three locations, which happen to be the Spirit Liquor stores in Middletown, Red Bank and Wanamassa. Soon however, they will be available in the Foodtown supermarket stores all over the state.
If you would like to purchase a shirt the cost is $20 for the white shirt (modeled above), and $15 for the other designs.

Posted by MiddletownMike at 1:15 AM